The Radiological Cleanup and Future Plans for Bikini Atoll 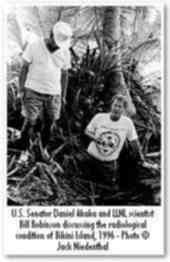 (sample taken from the book, For the Good of Mankind by Jack Niedenthal). The tasks now before the Bikinian leaders loom large. At the close of fiscal year 1995, all infrastructure for the cleanup of Bikini island was in place on Eneu island, which, after some remediation and extensive evaluation by scientists from all over the world, has been declared safe for habitation. Ground breaking ceremonies occurred on Bikini island in February of 1997. Several cleanup options for the island of Bikini are currently being discussed.

Since the early 1980's the leaders of the Bikinian community have insisted that, because of what happened in the 1970's with the aborted return to their atoll, they want the entire island of Bikini excavated and the soil removed to a depth of about 15 inches. Scientists involved with the Bikinians have stressed that while the excavation method would rid the island of the cesium-137, the removal of the topsoil would severely damage the environment, turning it into a virtual wasteland of wind-swept sand. The Council, however, feeling a responsibility toward their people, have repeatedly contended that a scrape of Bikini is the only way to guarantee safe living conditions on their island for their future generations. They want unrestricted use of their atoll.

The islanders believe that if they scrape the island in a patchwork fashion--as opposed to a complete excavation--the environmental impact could be minimized as one section could be refurbished and replanted before moving on to another. With the excess soil that is removed from the island, the Bikinians favor a plan to build a causeway between Bikini and Eneu islands. The 5.2 mile reef between these two islands is currently used--at low tide--for the transport of heavy equipment between the two construction sites.

Another scrape option often discussed by the Council regarding the storage of the contaminated soil involves shipping it to Nam island on the northwestern edge of Bikini Atoll where the one mile wide, 200 feet deep, Bravo crater is located. The soil would be stored on land.

Virtually all the scientists that have studied Bikini, however, favor some form of the well-documented and proven method of spreading potassium fertilizer over the entire island. This potassium-block method, which prevents the uptake of cesium because potassium, which is atomically similar to cesium, is what the food crops are looking for in the first place when they use the radiation as a source of food, has been studied in detail over the course of the past twenty years by Dr. Bill Robison of the Lawrence Livermore National Laboratory and a number of other scientific organizations. 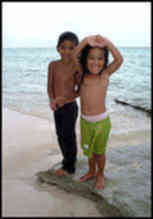 A compromise suggestion put forth by the scientists is that they scrape only the living area, which, traditionally, is situated along the lagoon side of Bikini, and then use potassium fertilizer on the remaining land area. After pronouncements by a committee of world renowned scientists convened by the International Atomic Energy Agency, the Bikinians have given this method serious consideration. Before this method could be selected, however, the U.S. government would have to promise to provide the people returning a supplemental food program, and they would have to issue a statement saying that they support and agree with the scientific pronouncements regarding this method of cleanup.

One problem with this method is that, again, the Bikinians have demanded that they have unrestricted use of their atoll. Another complication with this method is that it would fail to conform with the U.S. EPA's Superfund radiological cleanup regulation of 15 millirems above background levels of radiation, which will be discussed more in What About Radiation?

With regard to the issue of nuclear waste storage on Bikini Atoll from outside sources and countries, the Bikini Council, in May of 1995, passed a resolution and sent a letter to the national government stating that "because our old men and old women still desire to return to their homeland...we will not be pursuing the nuclear waste option for our islands." 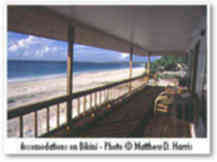 In January of 1996, to provide an economic base for a possible future resettlement of Bikini Atoll and to supplement the income from their already existing trust funds, the Bikini Council established a base for dive tourism on Bikini. As a result of Operation Crossroads, on the bottom of Bikini's lagoon rests the world's only aircraft carrier and the largest ship in the world available for diving (880 feet long), the U.S.S. Saratoga, as well as the Nagato, Admiral Yamamoto's flagship from where he ordered the Japanese Imperial Navy's attack on Pearl Harbor at the beginning of World War II, along with one other battleship, the Arkansas, two submarines, the Apogon and the Pilotfish, two destroyers, the Lamson and the Anderson, one frigate, the Sakawa, and one merchant craft, the Carlisle. All of these vessels have been declared radiologically safe for diving by Dr. Bill Robison of the Lawrence Livermore National Laboratory, are buoyed, and are available for diving on Bikini. 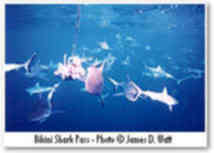 Though the Bikinians believe that dive tourism has the potential to become a cornerstone for their resettlement plan, their leaders continue to lobby the U.S. Congress for additional funding as the islanders maintain that it is the obligation of the U.S. government to provide for the cleanup all 23 islands of the atoll rather than just Bikini and Eneu islands. The people of Bikini also continue to make annual sojourns to their atoll, which in 1996 was visited by two U.S. senators, Frank Murkowski from Alaska and Daniel Akaka from Hawaii. In a recent Los Angeles Times article, Senator Frank Murkowski, speaking about the U.S. government's commitment to the people of Bikini, said, "There is not only a legal but a moral obligation on our part."