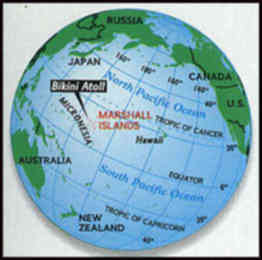 ORIGINAL HOME OF THE BIKINIANS:

Bikini Island was always considered the home island for the Bikinians 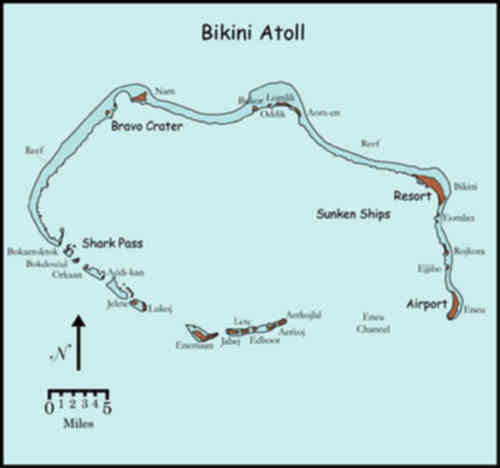 Above map of Bikini Atoll courtesy of Jeffrey Sasha Davis 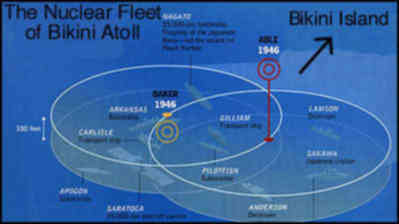 CURRENT HOME OF THE BIKINIANS:

"As soon as the war ended, we located the one spot on earth that hadn't been touched by the war and blew it to hell."
--Comedian Bob Hope commenting on Operation Crossroads

Weather
Air Temperature: 80-85 degrees all year. The months of June through December are a bit wetter though with less wind. The months of January through May are drier but with more wind.

Water Temperature: 80-85 degrees all year. There is more wave action in the months of January through May due to the trade winds.

Flora and Fauna
Food crops grown on Bikini and throughout the Marshalls include coconuts, pandanus, papaya, banana, arrowroot, taro, limes, breadfruit, and pumpkin. A wide variety of trees and other plants are also present on the islands. All fruits and vegetables used for the Bikini Atoll dive and sport fishing operation are imported.

Animal life on Bikini and throughout the Marshalls includes small lizards, hermit crabs, coconut crabs, and a wide variety of birds. Pigs, ducks and chickens are raised for food, and dogs and cats are kept as pets.