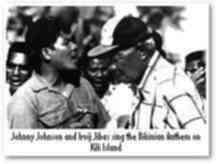 The thought is overwhelming
Rendering me helpless and in great despair.

My spirit leaves, drifting around and far away
Where it becomes caught in a current of immense power -
And only then do I find tranquility

The Flag of the People of Bikini Atoll

The 23 white stars in the field of blue in the upper left hand corner of the flag represent the islands of Bikini Atoll.

The three black stars in the upper right of the flag represent the three islands that were vaporized by the March 1, 1954, 15 megaton hydrogen bomb blast, code named Bravo.

The two black stars in the lower right hand corner represent where the Bikinians live now, Kili Island, 425 miles to the south of Bikini Atoll, and Ejit Island of Majuro Atoll. These two stars are symbolically far away from Bikini's stars on the flag as the islands are in real life (both in distance and quality of life).

The Marshallese words running across the bottom of the flag, "MEN OTEMJEJ REJ ILO BEIN ANIJ" [Translation: "Everything is in the hands of God."], represent the words spoken in 1946 by the Bikinian leader, Juda, to U.S. Commodore Ben Wyatt when the American went to Bikini to ask the islanders--on a Sunday after church--to give up their islands for the 'good of all mankind' so that the U.S. could test nuclear weapons.

The close resemblance of the Bikinian's flag to the flag of the United States is to remind the people and the government of America that a great debt is still owed by them to the people of Bikini.