"The Incomparable Wrecks of Bikini Atoll"
By Jim Church

My heart was pounding as I started the descent. "Relax, Jim, relax," I told myself, "it's just another dive." Yellowfin Tuna gliding by and the sharks in the distance barely registered in my excited mind. I stopped at 20 feet to adjust the straps of the unfamiliar twin 104 cubic foot tanks and vent some air from my BC. Divemaster Fabio Amaral waited patiently until I gave him the OK sign. Then we continued our descent.

USS Saratoga: The Grand Old Lady
Looking down through the clear, blue water, I was able to identify her bridge superstructure [the structure above the flight deck] immediately. A twin five inch/38 gun mount overlooked the vast expanse of Saratoga's flight deck. [A five inch/38 gun fires a five inch diameter, 54 pound projectile; the length of the gun barrel is 38 times five inches.] I was actually on the historic Saratoga, the world's only divable aircraft carrier. For me, a former sailor and naval history buff, this dive bordered on emotional overload. I had finally met the grand old lady, known affectionately as Sara.

The inside of Saratoga's bridge was shrouded in darkness. Only small patches of blue water were visible at the rectangular slits in the closed porthole covers. I was stirring up silt, so I took a couple quick "by guess and by golly" photographs and left the bridge to continue exploring. It seemed I had no sooner reached the flight deck than Fabio signaled it was time to ascend. I looked at my gauges: 100 feet deep, plenty of air, but 30 minutes of my life had slipped by almost without notice. We rose slowly to the three tier hangbars for decompression stops at 30, 20 and 10 feet.

Not all the attacks on Saratoga happened at sea. In 1937 aircraft of the IJN [Imperial Japanese Navy] successfully bombed a mockup of Saratoga at the Kashima Bombing Range. During the pre-war years in the U.S., the future of aircraft carriers, such as Saratoga, had been in jeopardy. Heated debates had raged about their value and deployment. Loaded with aviation gasoline and munitions, and without the guns and armor to face battleships, carriers such as Saratoga were said to be too easy to sink, too expensive to build and maintain and too costly to lose. In WW II, however, large carriers replaced battleships as the major ships. Their aircraft repeatedly sank enemy ships beyond the carrier's [and battleship's] horizon.

The next dive would be to Saratoga's hanger deck [the deck immediately below the flight deck] to 130/135 feet. Bottom time would be limited to 20 minutes; Fabio would be my safety man. We would go down the forward flight deck elevator, swim through the hanger deck and exit at the aft elevator.

Saratoga helped win the war against the Japanese, but not without suffering severe battle damage and loss of life. She was hit by torpedoes twice in 1942, was badly damaged at Guadalcanal and was pounded by seven bombs and five kamikazes at Iwo Jima. The Japanese claimed to have sunk her seven times, but she survived the bloody Pacific sea war and won seven battle stars. Before and during the war, Saratoga also served as a training ship for hundreds of pilots, logging a record 89,195 carrier landings. [This record may still stand.] When the war ended, Saratoga continued serving her country by joining Operation Magic Carpet and carrying 29,204 service persons home to the U.S.

The slow swim through Saratoga's hanger deck gave me goose bumps. I've penetrated sunken Japanese ships at Truk Lagoon, some at even deeper depths, but this was mind-blowing! We swam slowly and carefully to minimize kicked-up silt and stopped at each subject. Fabio shined his dive light on the bombs or aircraft so I could autofocus with my RS 20-35mm lens. Rather than calculate exposures, I simply shot five shots from each angle with TTL and bracketed from f/4 to f/16. The first subject was a row of 500 pound bombs. We moved on to a Helldiver dive bomber and then to the 50 caliber [0.5 inch diameter projectile] machine gun turret of an Avenger torpedo bomber. When we reached the torpedoes and aerial rockets, I was out of film.

There was no place for the aging Saratoga in the post-war Navy. Weakened by the ravages of time and the strains of hard use and wartime damage, she was no longer a first line carrier. Designed in the days of lightweight biplanes, the heavier post-war jet aircraft would have slammed onto her flight deck at greater speeds and with greater forces than she was designed to handle. However, Saratoga was destined to serve her country one last time. She was sacrificed as a target vessel at Bikini Atoll.

HIJMS Nagato
Diving on His Imperial Japanese Majesty's Ship, the battleship Nagato, was a dive into history. She was the most hated ship at Bikini because she was associated with the Japanese attack on Pearl Harbor. Nagato's biggest sin was having been Admiral Isoroku Yamamoto's flagship in 1941, when he and his staff planned the Pearl harbor attack. Ironically, neither Admiral Yamamoto nor Nagato participated in the actual attack.

I wanted to photograph the bridge where I knew Admiral Yamamoto had stood. I descended to the sandy bottom and slowly settled in a standing position. I moved forward oh so carefully to avoid stirring up the sand. The bridge appeared in the viewfinder, but before I could fine-tune the composition, another diver swam between me and the bridge with flailing fins. I waited as long as I could [170 feet] for the sand to settle. When it was time to ascend I took a series of bracketed shots but didn't get the crystal-clear image I wanted. Oh well, win a few, lose a few. I snapped a few quick shots of her 16 inch gun muzzles and propellers as consolation prizes.

Nagato was the only Japanese battleship to survive the war and some thought using her as a target vessel was an act of revenge because of her association with the Pearl Harbor attack. Once a proud ship, 727 feet, 9 inches long and weighing 42,850 tons when fully loaded, she now lies upside down in 160 to 170 feet of water. Her huge propellers reach up from her hull; her bridge juts out to one side.

USS Lamson
"She looks like a pirate ship with all her guns," was Fabio Amaral's apt description of the destroyer USS Lamson. Diving down to her main deck, at about 140 feet, I could understand Fabio's description. Her guns and torpedo tubes were impressive, but I was mostly interested in the 20mm [20mm diameter projectile] heavy machine guns. As a child in WW II, I'd seen newsreels of 20mm guns in action and my father had been a machinist helping to manufacture these weapons.

A 341 foot destroyer capable of 36.5 knots, Lamson had been armed with five, five inch/38 guns, 12, 21 inch diameter torpedo tubes, depth charges and numerous anti-aircraft guns. In 1937 Lamson had joined the search for Amelia Earhart. In World War II she fought in the Pacific and was struck by a kamikaze during the battle of Leyte. Lamson now rests upright in 165 feet of water. Her superstructure [the structure above the hull's top deck] is badly damaged, but she still has the sleek lines of a destroyer.

USS Anderson
The 348 foot Anderson, a destroyer similar to the Lamson, lies on her port side at 165 feet. A five inch/38 gun mount lies on its side in the sandy bottom in front of her damaged bridge. Anderson also has torpedo tubes, depth charges and 20 and 40mm ammunition still nestled in racks inside a gun tub [armored, circular shield]. As interesting as Anderson was, however, I preferred the upright Lamson.

USS Apogon
The conning tower of the submarine Apogon materialized out of the gloom. A small forest of wire corals has taken residence there, as well as on Apogon's hull. Hundreds of small fish living in the clumps of wire coral reminded me of ornaments on a Christmas tree. The single-barreled, 40mm anti-aircraft guns [which fired a projectile 40mm in diameter] mounted at the front and back of the conning tower, gave a sense of balance to the periscope shears, snorkel and radar equipment rising from the center.

A 311 foot fleet Balao class submarine, Apogon carried a crew of six officers and 60 enlisted men. She could do 20 to 25 knots on the surface but only 8.75 knots when submerged. Five Japanese ships felt the wrath of her torpedoes [two confirmed sunk, three unconfirmed sunk and two damaged]. However, Apogon paid a price for her victories: she was rammed by a Japanese freighter. Her radar mast was bent and she lost several feet of her periscope shears and main periscope. 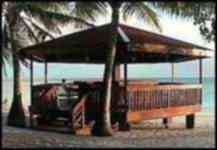