Bikinis and Bombs is an installation that brings to light the hydrogen bomb testing that the United States Government conducted in the Marshall Islands immediately following World War II. My father, Arthur J. Guelcher, was one of the soldiers in the United States Army stationed on a small island in the South Pacific called Eniwetok. From March through May 1954 the U.S. Government conducted “Operation Castle”, detonating the largest weapons ever tested in front of an audience. My father was required to witness these tests beginning with the fifteen-megaton explosion of “Castle Bravo” on March 1, 1954. Through the twelve years of military occupation and weapons testing that followed in these islands, our government committed a kind of slow genocide. The local residents still cannot return to their homes and military personnel involved are slowly dying off from illnesses caused by 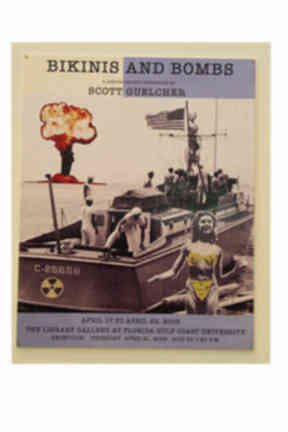 radiation. Yet our government still denies responsibility, and there exists no memorial for these people whose contributions are considered to be “for the good of mankind”. There is a memorial for every war, battle, or operation in American history, so why is there no recognition for these United States citizens and island natives who also proudly served our country? For example: the invention of the atomic sized bathing suit called the “bikini” designed by French engineer Louis Reard was named after a similar weapons test in the South Pacific on Bikini Atoll. There is clearly a surreal quality to the events that occurred in this island chain.

I have a direct link to what happened on these islands. I want the viewer to be aware of these events and why they are important to me and to the history of the world. I had previous knowledge of these events growing up from stories my father told me, but I wanted to know more than just my father’s story for this project, so I did extensive research that included every newsletter from

the National Association of Radiation Survivors from 1985 to present; many books including “For the Good of Mankind” by Jack Niedenthal and “100 Suns” by Michael Light; and related internet sites such as www.bikiniatoll.com and the Bomb Project (www.firstpulseprojects.net/bombproject). The individual pieces in this exhibition were developed in response to both my personal attachments to the subject, and the information derived from the research.

This installation artwork takes the viewer through these events. In order to tell this story, I felt it important to use many different types of media. With my paintings I used acrylic paint. For the work of art “Memorial” I used the following materials: acrylic paint, plastic toy soldiers, wood, and individually molded porcelain teeth. I designed and made from scratch the bikini in the show and the bikinis worn at the reception were purchased and hand painted with fabric paint. I used an Adirondack chair and painted it to match the image in the famous U.S. Military photo in the installation “High Noon”. With the “Eniwetok Atoll Guide of Truth” I scanned the original 1954 guide pages on the computer and used Photoshop to manipulate them.

So please take some time and experience island life under a nuclear sun.